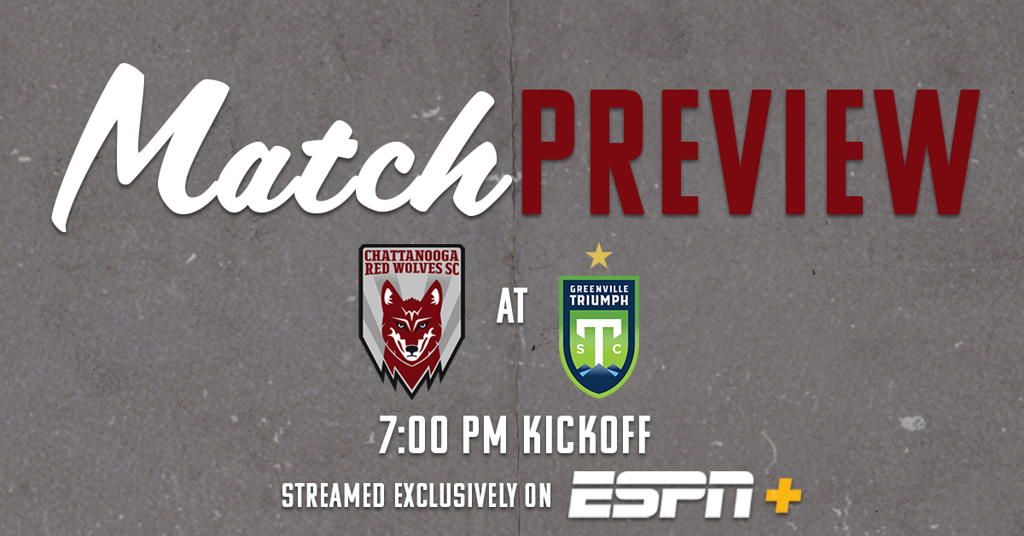 1. Scorching Red Wolves Look to Crash the Party in Greenville

The Red Wolves have accomplished something few professional sports teams ever do, riding a 15-game unbeaten run that started on the 22nd of May at CHI Memorial Stadium. The impressive run has put the Red Wolves at the top of the table.

Last time out the Red Wolves were victorious 1-0 over North Texas SC via a stoppage time winner from MOTM Jimmie Villalobos set up by a sensational ball in from Jonathan Ricketts. The tendency for the cardiac Red Wolves to score late goals has trended now towards a habit of breaking hearts, and North Texas fell victim to a stoppage time winner for the third time in this campaign alone. The Red Wolves held 54% of the ball throughout the match and limited North Texas to just one shot on target, in the process completing more passes and winning the aerial duels 14-8.

The last time Greenville faced off against the Red Wolves in Chattanooga the sides split a point apiece. An early 1-0 game after a gem of a free kick from Jose Carrera-Garcia was later equalized by a 59th minute goal from Greenville.

Defending champions Greenville Triumph finally got off the mark for the month of August at the last attempt, beating Toronto FC II 3-0 at home. The win corrected what was a red patch of form for John Harkes and his side, losing 4 matches in a row prior and being outscored 9-4 over those contests.

The good news for the Triumph is that their win put them in sole possession of third place in the league after a poor run of games. The bad news is they now welcome the hottest team in professional sports to Legacy Early College Park Saturday night. Greenville will hope that star-man and joint top goal scorer in USL League One Marios Lomis can get back to scoring form Saturday night after not scoring a goal in his previous six contests.

On the other end of the pitch goalkeeper Dallas Jaye has been a bright spot in a bit of a down season for the Triumph, racking up 42 saves and keeping 5 clean sheets so far this season. As a team, Greenville also sits joint top of the league in clean sheets, adding 2 to Dallas Jaye’s 5 so far.

3. What to Watch for and What to Expect

The matchup Saturday night will boast perfect conditions in Greenville, with temperatures in the low 80s and no rain expected. This will be beneficial to a Red Wolves side who have played brilliantly this season in a high press that leads to opportunities on the counterattack.

Another name to watch will be Tim Trilk in the Red Wolves goal who has been nothing short of dominant in the last several weeks. Dubbed Trilky Smooth, the man of the hour has kept clean sheets in 4 straight games with several save of the week nominations to go with them. His play has been critical in bolstering what is already one of the best backline units in the league who will look to make life difficult for the Triumph in Greenville.

For Greenville, Aaron Walker scored a brace in the Triumph’s game against Toronto, picking up the squad who have been in a bit of a lull in the attacking third. The Triumph will also be without Dallas Jaye in goal Saturday night, who picked up a red card in the 90th minute in the 3-0 win on Friday.

The action kicks off at 7 PM EST on September, 11, as the Cardiac Red Wolves look to extend their run of unbeaten performances to 16 against the Greenville Triumph.